Imitation is the sincerest form of flattery

I am a keen follower of David Hobby’s strobist blog.  One of the shots that he described, which probably impressed me the most was his levitating compact fluorescent light bulb.  So much so, that I could not resist remaking the shot.

Before going into some of the detail, I will do exactly like David, and point out that this shot comes with a health warning!  Setting this shot up involves working with live, uninsulated electrical contacts.  Mains voltage can kill you.  Do not attempt this at home unless you are comfortable with all the precautions you need to take when working with electricity.  If not, for your own sake, please do not try this.

My second point, which do I prefer, David’s shot, or mine?  David’s is much “grittier” and dramatic.  Mine is more clinical.  I did the shot not having looked at David’s for a couple of months, so I couldn’t remember exactly what his looked like.  In the end, I think I like David’s better, because it is more dramatic.

Now, here goes for the detail on the setup of the shot.  It is basically the same as David’s, but the equipment I used was slightly different.  (I have skimped a bit on the detail.  For a more detailed description of the setup, read David’s original post.)

A big part of the preparation was first to get the light bulb ready to be “levitated” in front of the camera.  This involves soldering wires to the contacts of the bulb, and attaching it to a dowel rod so that it can be held in front of the backdrop, which in my case was also a black piece of card.  In my case I carefully drilled the base of the light bulb so that the dowel could be inserted into it.  (Two bulbs were destroyed in that process.)  My first attempt at switching on the light bulb was done outside on the patio.  No matter how careful I knew I was being, I still had a sense of apprehension that something could “blow up” on me. 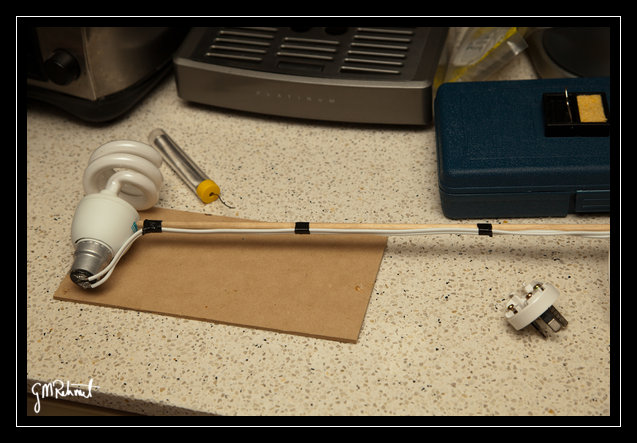 Next, the task of setting up the shot began.

Apart from the intriguing nature of the photo, what draws me to this shot is the fact that it acts as a very good illustration of a lot of principles of controlling light, and mixing the light from flashguns with an “ambient” source.  In this case, the shoot was done with a Canon EOS 5DmkII, using a Canon 24-105mm f/4L IS USM lens, zoomed to 105mm.

The first stage was to get the exposure of the CFL bulb itself right.  I opted for an exposure that just started to show a yellow tinge to the light from the bulb. 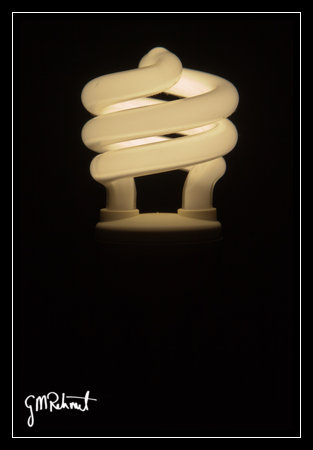 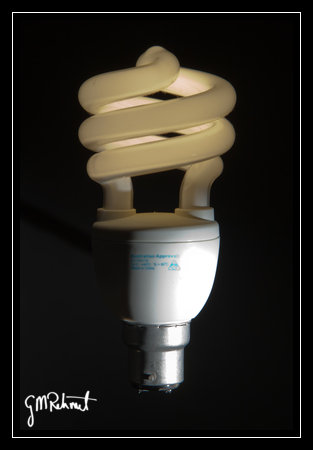 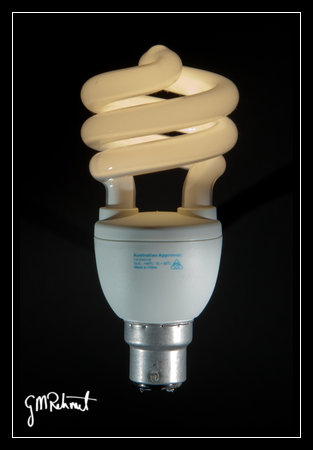 The finishing touch of course is to light up the backdrop (black posterboard) with a gelled flash.  It was interesting to experiment with a number of colours, but blue seemed to provide the best effect.  I tried putting a grid on the gelled flash, but the backdrop was just eating up too much light to allow that.

Here is the final result again, but this time using a green gel: 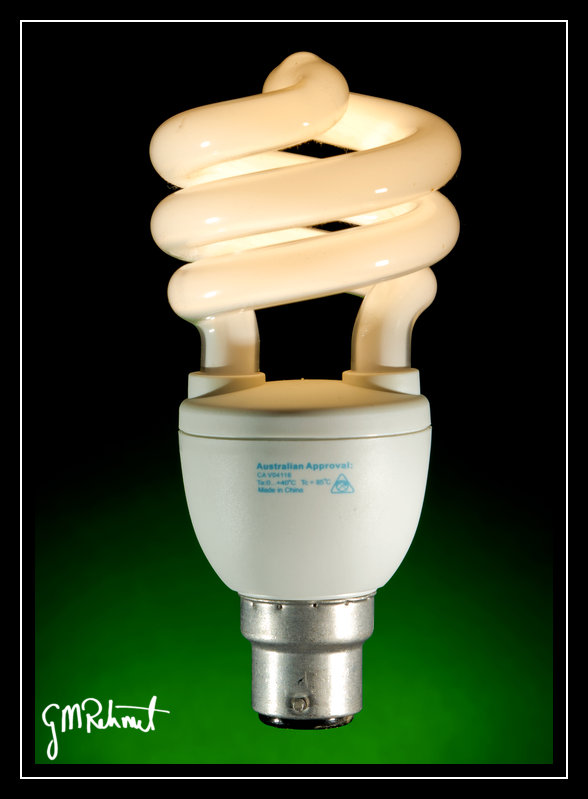 Essentially, in execution, the technique is the same as used by David Hobby on the strobist blog.  The exposure, and the interpretation are different, however.  The equipment used is also essentially the same, with a few small differences.  The main difference being that, instead of cardboard snoots for the flashguns illuminating the base of the light bulb, I used pieces of black foam rubber – an idea that many photographers will be familiar with from Neil van Niekerk’s blog as the “black foamie thingy“.

The resulting final setup is shown below: 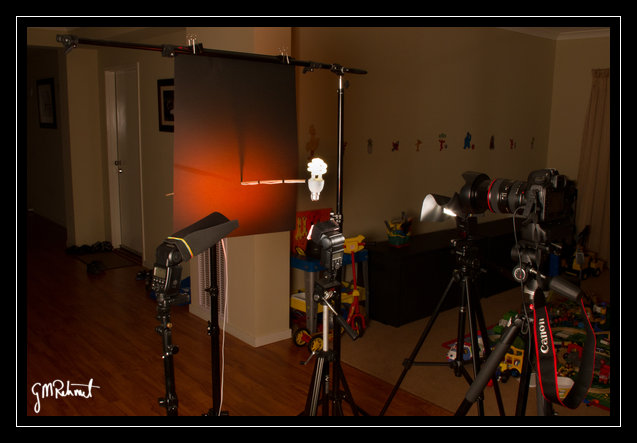 The equipment list used to do the shot is quite impressive:

Not actually part of the setup for the shot, but still essential are of course a soldering iron and screw drivers and a knife to cut the hole in the posterboard to fit the dowel and wire through.

After using the floating light bulb as a desktop background, all the little issues with the shot – like a little bit of light from the flashes illuminating the base of the bulb spilling onto the tube – were irritating me no end.  So I reshot it.  This time, using an EOS 7D allowed me flash sync speeds up to 1/250s, which gave me a little more flexibility to control the exposure of the light from the tube.  The shot at the top of this post is now one of the ones shot in the second round with the 7D.